"The most sought-after wine in the nooks of bodegas. It combines all the virtues of the best Amontillados on the nose with the finest Olorosos in the mouth. It is a wine which was born by chance, the result of a mystery yet to be solved. Complex, very long - equally suited to solitary meditation and lively conversation among friends."

Bright amber in colour, displays powerful notes of nuts, highlighting especially almond and hazelnut, but there are also notes of walnut and coffee. Wood notes come through in the aroma. It is very dry and complex, it displays outstanding wide-ranging flavour and a lingering persistence. It’s a bit smoother than Amontillado but not as smooth as an Oloroso wine.

Palo Cortado is a rare variety of sherry that is initially aged under flor to become a fino or amontillado, but inexplicably loses its veil of flor and begins aging oxidatively as an oloroso. The result is a wine with some of the richness of oloroso and some of the crispness of amontillado.

Delgado Zuleta is the oldest, still active, producer of Sherry. Most Sherry is produced in Jerez but there is a smaller town of Sanlucar de Barrameda, which is more coastal, still permitted to produce Sherry wines, this is where Delgado Zuleta is set up. They have been producing top quality Sherry wines since 1744. The forefront of Delgado Zuleta's portfolio is of the Manzanilla Sherries. 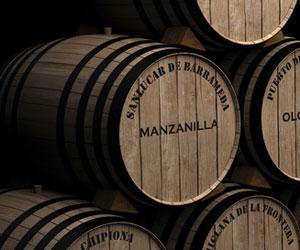